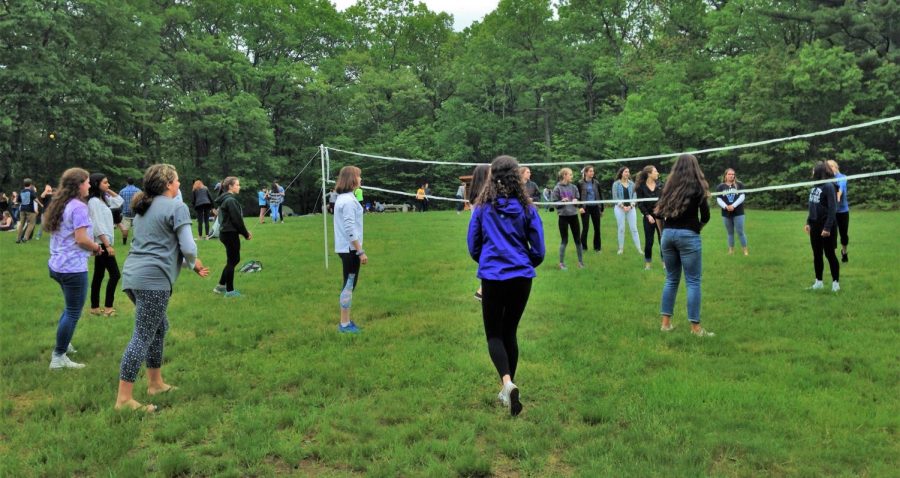 A Comprehensive Look at Senior Week

With 50 days from the writing of this article, the Hopkinton High School (HHS) senior class of 2018 will be graduating. Having just had their “50 Day Dinner,” it is almost time to begin closing out their high school career. One of the traditions to close out the senior year is with senior week, a week at the end of the school year to celebrate the long childhood journey together as a class.

“It’s a nice way for the class to bond for one last time before we go off and graduate. After graduation, it’s going to be unlikely that we’re all in the same place ever again,” class president Nate Pucci said.

The “senior week” occurs from Tuesday, May 29th to June 1st. The events include a dinner dance at Gillette stadium for the seniors and their parents, a picnic at the Hopkinton state park, graduation rehearsal, a boat cruise, and finally, the graduation ceremony.

Nearby schools also hold senior events, but these vary from Hopkinton High School’s.

After talking to a friend whose kids attended Newton North, senior parent Liz Pomeroy said, “They don’t do a parent dinner dance, but they do have a senior prom.”

Pomeroy also said that Newton North does not have a senior picnic, but that they have a senior breakfast for signing yearbooks, and a recognition night that is combined with their graduation ceremony.

A parent from Franklin said that they do not have a senior picnic nor a parent-senior event (like HHS has at Gillette) because their senior class is two times the size of the senior class at HHS, but they do have a senior boat cruise as well as a senior only banquet.

Senior-Parent Dinner Dance
Though this is technically the week before senior week, Pucci said the senior dinner dance is what officially kicks off senior week on Wednesday, May 23rd (the last day of senior classes).

The dinner dance is not a school sponsored event and is completely parent run. It is for seniors and their parents and is held at the Gillette Stadium Putnam Club.

Because of the scale of this event, there is a committee that began planning and orchestrating this event in the spring of 2017. The committee includes Mrs. Pucci, Mrs. Schneider, Mrs. Belise, Mrs. Smith, Mrs. Leone, and other parent volunteers.

Many of the seniors are football fans and have experienced three super bowl appearances with the New England Patriots in their high school career, something that very few high schoolers experience. Having the dinner dance at the Putnam Club, which overlooks the Patriot’s playing field, will commemorate the unique experience these seniors have had in the past four years.

One of the main components of the dinner dance is the photo slideshow. Parents were asked to collect and submit photos of their children: one photo from when they were little, one when they were in middle school, one in high school, and then some candid photos.

The slideshow will be put together by Tammy Gilbert and her husband and will be displayed throughout the night at the dinner dance.

The seating arrangement is a combination of open seating as well as reserved seating for those that want to preplan who they are sitting with in groups of twelve.

The Putnam Club was actually chosen as the venue in 2015, when Liz Pomeroy was helping plan her eldest son’s dinner dance. They started by going out and looking at different venues to hold the dinner dance. Pomeroy said that they had taken the feedback from previous class parents in order to choose a venue.

The senior dinner dance use to be held at more local places like the Sheraton Framingham Hotel & Conference Center and the DoubleTree by Hilton hotel in Westborough, but some of the feedback was that these venues were extremely small and that people could not see the slideshow of photos.

“If there’s 290 kids in your class and each of them brought two parents, you’re talking about potentially 900 people, the Sheraton can’t seat 900 people in their ballroom and none of the local hotels can,” Pomeroy said.

Currently, 630 tickets have been sold, and Pomeroy expects there will be around 700 to 750 tickets sold by the time of the dinner dance.

Pomeroy said that the Putnam Club is more expensive, but is much better than the other options. She said it is a great venue because there are television screens everywhere so that everyone can see the slideshow, it is very spacious, and the Putnam Club knows how to handle large volumes of people.

The Putnam Club has been used since 2015 and has been a successful venue since then, for that reason, it will be used again this year.

Senior Transition Day
On the same day as the senior dinner dance, May 23rd, is the senior transition day where Seniors attend various workshops that help teach seniors how to live on their own.

Some of the workshops include an alumni panel, a workshop to teach practical life skills like changing a tire, and a workshop on managing finances.

Senior Picnic
The next senior week event is the senior picnic on Tuesday, May 29th. After final exams that occur that morning, the high school has arranged for buses to take the seniors to the state park at 11:30AM, and then back to the high school at 1:30PM as well as 2:30PM.

The picnic is held at the Hopkinton State Park’s Split Rock Pavilion, a large field near the back of the state park and below the dam.

The picnic will be catered by a barbecue food truck. Cheryl Elder, one of the class advisors, did not want the name of the caterer to be shared just yet, so as to keep it a bit of a surprise.

“We used that same food caterer a few years ago when I was the past class advisor, and it worked out well,” Elder said.

There will also be an ice cream truck from either Juniper Farms or Uhlman’s, but this detail has not yet been finalized.

Parents will also be asked to provide additional supplies and food items like waters, chips, snacks, coolers, ice, and backyard games. Pomeroy said they will be asking parents for ladder ball, frisbees, and cornhole. Students are also welcome to bring other backyard activities.

This event is planned by Liz Pomeroy, Kathy LaFlash, and several other parents who have volunteered their time to plan and setup this

event. A lot of what Pomeroy did with her eldest son’s class in 2015 has helped her plan this year’s senior picnic and other senior week activities. In 2015 they held the senior picnic at the Hopkinton YMCA and had Chipotle as the caterer, but she and the other organizers have decided that the state park along with the new caterer is a better option.

“Chipotle was a big hit for most people, but it was very expensive. This [the state park] is much more affordable for the class,” Pomeroy said.

The state park’s beach will not be open, but Pucci said people had expressed not wanting to swim there anyways. Plus, water temperatures in late May will still be quite chilly.

Elder said the boat rental at the state park reservoir has not been used in the past.

From looking on their website, the boathouse will be fully open on weekdays starting the day before the senior picnic on Monday, May 28th and will be another option for the seniors to enjoy the picnic

Graduation Rehearsal
Following the last final exam ending at about 9:15AM on Wednesday, seniors will have graduation rehearsal. Seniors will also receive their caps and gowns that morning and then will run through the ceremony process in the high school athletic center, where graduation occurs.

Most of the high school’s seniors attended Center School, so this final walk through the building will be a nice closure to its use. The Center School administration were the ones who reached out to the Class of 2018 to ask if they would walk throughout the halls for the elementary school kids.

“They thought it might be nice for our seniors to go down, take a final walk through center school, and have the kids see everybody in their gowns,” Elder said.

Boat Cruise
Wednesday night, the same day as the graduation rehearsal, will be the senior boat cruise.

Buses leave the high school at 5:00PM to take the seniors to Boston Harbor, where they board the cruise and travel around Boston Harbor for three hours.

Spirit Cruises is the cruise company the high school has been using for the past several years. The boat has two indoor floors and then an open deck upstairs. The entire boat will be reserved just for the seniors.

It is a semi-casual affair with dinner, dancing, and photo taking. There will also be a DJ there.

“It’s to try and get class unity and to be able to take pictures with each other. It’s just one more event that includes everyone and it’s a way for people to make more memories before we leave the high school,” Pucci said.

Senior Recognition Night
Thursday is senior recognition night where most scholarships and awards seniors have applied for are presented. The event starts at 7:00PM in the high school athletic center.

This year’s recognition night will be a bit different with the addition of some student speeches and maybe a student performance. Evan Bishop, the principal, said that they have not yet decided on all of the performances.

Graduation
And finally, to close out senior week and the seniors high school career, is graduation, which takes place on Friday.

Graduation includes speeches by the class president, Nate Pucci, speech by the valedictorian and the salidictorian, as well as instrumental and vocal music performances.

Finally, the seniors will shake Mr. Bishop’s hand, receive their diploma, move their tassels (the stringy things on top of the graduation caps) from the right side to the left side of their caps, and then the seniors will have graduated, parting ways to different walks of life.