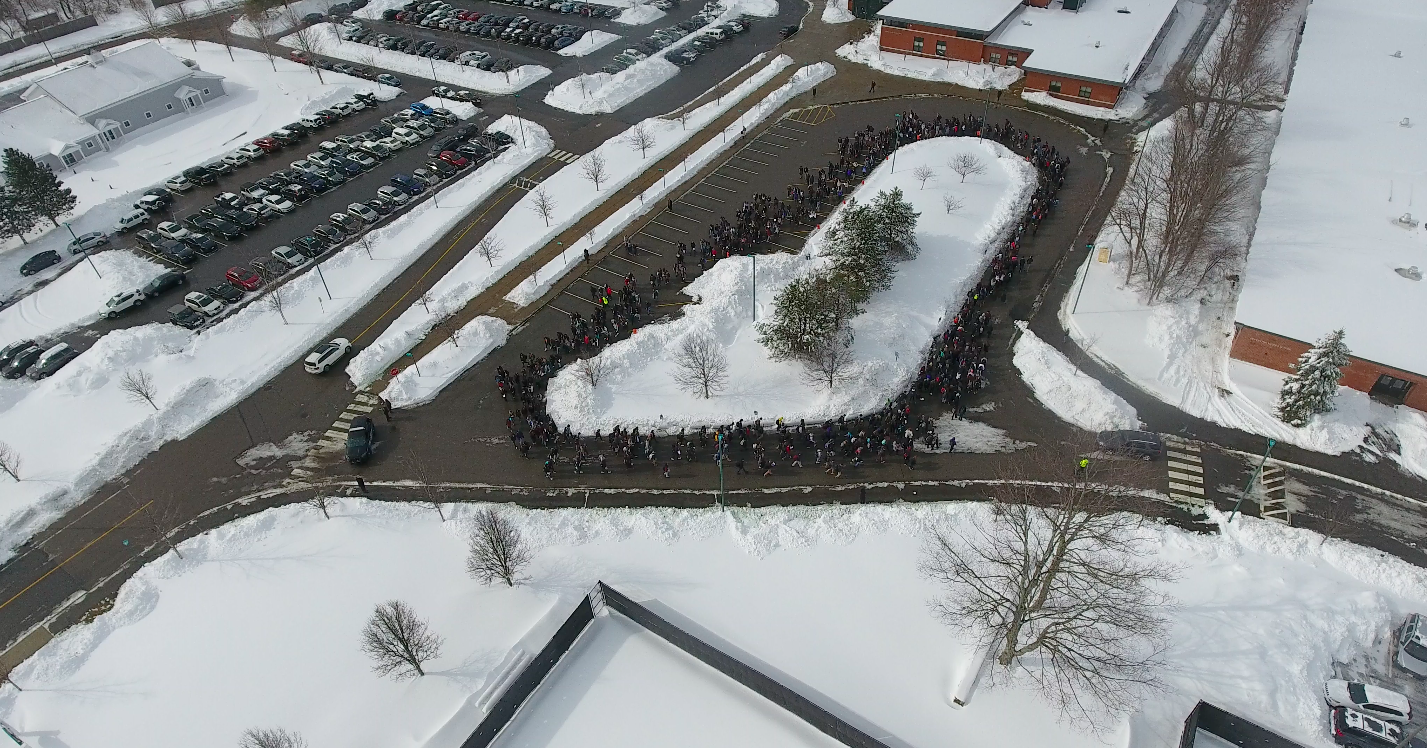 An aerial photo of all of the students who participated in the walkout. Photo by: Sam Cote (Sam Cote)

An aerial photo of all of the students who participated in the walkout. Photo by: Sam Cote

The highly publicized and debated event happened at 10:00 AM. Hundreds of students took a break from their normal school day to congregate in Hopkinton High Schools bus loop.

Some students participated to honor the victims of the Parkland shooting,  while others wanted to send the message to our lawmakers that there should be more restrictions on guns.

Junior Selia Potus took on the difficult and brave task of organizing the school walkout. Potus made a blog prior to the event to let students know the purpose and expectations of the walkout.

Potus wrote in the blog that this walkout not only had the purpose of showing support to the victims of Parkland, Florida, but to symbolize what a school looks like without kids and the permanent absence of the children who have lost their lives to gun violence.

After a lot of preparation, which included talking to the administration to get it cleared and using media to promote it, March 14 arrived. Potus was happy with the outcome and the amount of students who walked out.

The walkout went as planned, and I was pleasantly surprised with the positive results. For the most part, everyone was super respectful and polite during the entire walkout which was awesome,” Potus said.  “We handed out all of our educational flyers (450 exactly) and still, we didn’t have enough for everyone who came!”

Potus was not the only one who believed the walkout went smoothly. The general consensus from students who participated was positive. Students walked around the bus loop for 17 minutes, honored the victims, got their message across, then returned to school to finish their day without any punishment or significant backlash.

I’m really happy with the amount of support I got. I think people were able to learn why I was interested in leading this and my ultimate goal was to encourage and educate people about this topic,” Potus said.

Senior class president Nate Pucci was one of the hundreds of students who decided to participate and had positive things to say about the experience.

I chose not to walkout because I believed the walkout got way too political, and was less about a tribute to the victims in Parkland and more about trying to get more restrictions on gun laws,” Cooney said.

The political statement was not the only problem among students who chose not to walkout, however. While no students who made either decision were penalized in anyway by the school, some students, including Cooney, still felt like they were, in a way, receiving backlash for their decision.

After the administration of Hopkinton High School showed an overwhelming amount of support towards the walkout, students who did not choose to participate began to feel like they were being judged and scrutinized by classmates and teachers for their decision to not participate.

When the time for the walkout arrived, almost everyone in my class left, leaving only two or three of us in the class. I felt that everyone, students and administration, were judging me for my decision to not participate, when I did not judge anyone who decided to participate,” Cooney added.

So, while the walkout was overall a very well-organized and successful event for those who participated, the experience was, unfortunately, not enjoyable for all students who decided to stay in school during those 17 minutes. While the administration made a strong effort to accommodate those who decided to walkout, students who did not participate did not feel like they received this same support.

Despite the discomfort of students who chose to not participate, the walkout appeared to be a very successful student protest that could pave the way for future protests, tributes, and collective political messages within Hopkinton High School.

A lot of credit can be given to the students who chose to organize this event, particularly Potus, who successfully and willingly took the lead.

Now, the question remains whether these national protests will have their intended impact or if a similar protest be needed in the near future.

Potus’s blog regarding the walkout.