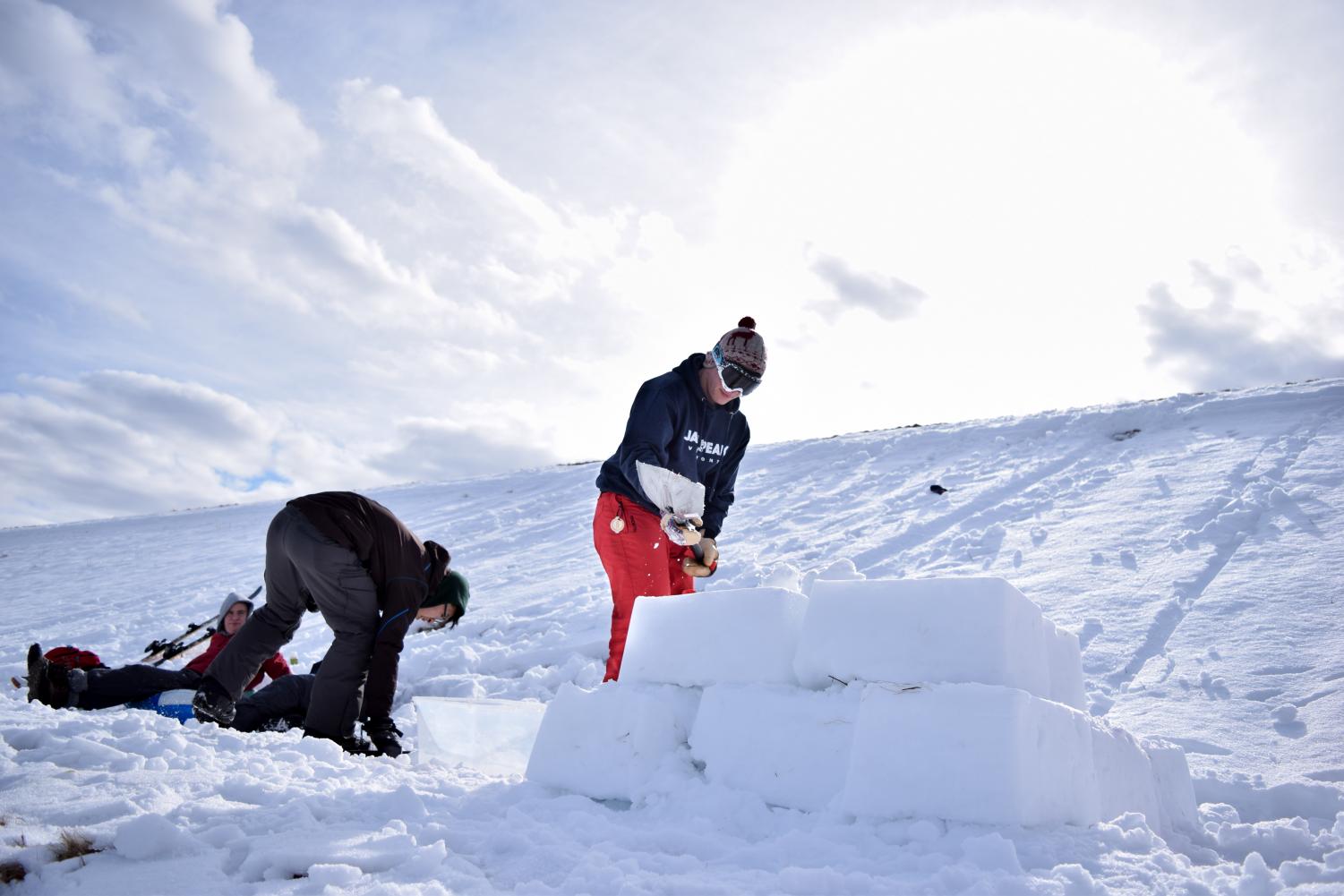 Rob Hart (sitting), Lu Wang (left), and Andrew Smith (right) build a ski jump to get some air and practice some big tricks for their X-Games daybut.

Students pass on four feet of Snow in VT and decide to stay local.

Although some northern ski resorts have received four feet of fresh powder this past week, some Hopkinton High School seniors decided to mix up their ski season and keep it local, opting to build a ski jump at the Hopkinton State Park dam.

Despite the spring season being four days away, these seniors wanted to take advantage of the leftover snow dumped by recent nor’easter storms.

These seniors came to the state park to have some fun as they begin to close out the final months of their senior year.

They built the jump to practice their tricks and improve their skills in a safe environment, absent from the pressure of onlookers. The terrain park at ski mountains are normally right under the ski lift or on the same trail as the ski lift, meaning people are constantly watching, waiting to be impressed.

“As much as we all would like to admit that we don’t change our performance in front of other people, we do. So [the state park] is a nice safe environment to practice things like tricks,” Chris Pomeroy, one of the seniors, said.

Pomeroy said that he came to the state park to practice his skiing skills and skiing form that he has been trying to improve in recent years.

The seniors passed on four feet of snow that northern ski mountains received for multiple reasons.

Some of these seniors have taken multiple ski trips to the north this season, including trips to Killington, Jay Peak, Stratton, Okemo, Sunapee, Sunday River, and Mont Tremblant. The costs associated with these trips accumulate rapidly.

Another reason was that going to the state park meant that those who don’t ski or snowboard can sled.

“We have friends that don’t ski who obviously aren’t going to pay money to go to a mountain. It’s perfect because they can come and sled,” Max Siegfried, another participating senior, said.

The conditions were less than mediocre at the dam, despite the recent snowstorms. And the seniors definitely didn’t see the four feet of powder that some Vermont mountains were boasting.

“The snow has kind of hardened up and it’s very fast on the sleds,” Siegfried said, “It also hurts when you fall down.”

“We’re hoping that next week’s nor’easter brings us a lot of snow so that we can get back out here and take advantage of the jump we made today,” Pomeroy said.

Originally, the seniors had planned on going to the state park on Tuesday, the day the snowstorm hit and dropped around twenty inches of snow, but when they arrived at the park entrance – the gates were closed.

“It was actually our biggest storm this year, and maybe even out of the last two years, because we got between twenty to thirty inches,” Pomeroy said.

That snowstorm caused some down trees and a school cancellation.

Instead, they went on Friday after school was let out at 1:50 PM.

The seniors arrived at the state park at around 3:15 PM and then hauled their gear (including skis, boots, shovels, bins, and ice melt) another 650 yards from the parking lot to the dam, where they set up shop and began sledding, skiing, snowboarding, and building a jump.

Smith said he looked up How-to videos on how to build a jump and had acquired some knowledge by observing how ski jumps are built at ski resorts. Smith also said he has built some jumps in his backyard before.

“Basically, it’s like building a sand castle. You just get a big bin, put some snow in it, flatten it, harden it, and just tip that over, and then you build the jump up block by block, which packs the snow in really hard,” Pomeroy, said.

Siegfried said the main thing is to ski over the jump many times, which eventually forms the shape of the jump.

“It’s kind of more of a tabletop jump right now. I think they’re working on making it a little steeper,” Siegfried said.

The seniors had started building the jump at around 3:30 PM. Smith said it would take them about an hour and a half to complete the jump, giving them around an hour to actually use the jump before sunset.

Smith said they were set back when a fellow tube sledder partially destroyed the jump.

“We had some people dragging their feet through it [the jump] on the tubes, destroying it. I’m a little upset, but we’ll get back out there and build it again,” Smith said.

Though the seniors knew their jump would melt in the next few days due to warmer weather, they were glad they took advantage of the snow now.

“Get it while you can. It’s New England, and global warming is really cutting down the snow,” Smith said. 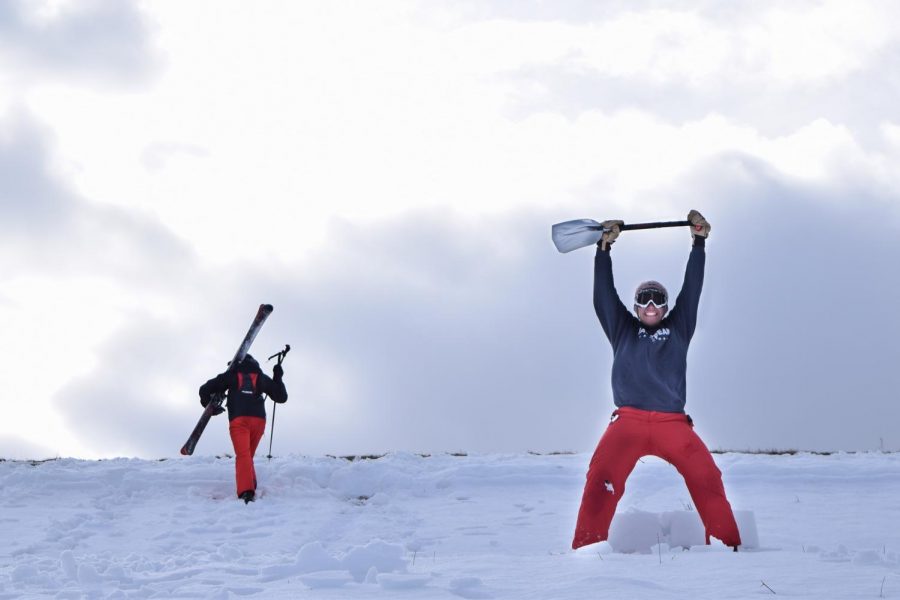