Lisa Senin: A New Look About My Parents 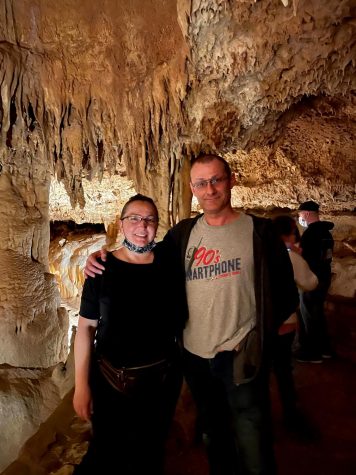 From March 28 to April 2, 2021, my parents and I vacationed in Texas, since they are planning to move there. I took this picture of my parents at the spot called Inner Space Cavern (basically caves).

They wanted a picture of themselves, so I took one for them. Looking back at it, I have some sort of emotional attachment to it. To me, it signifies the growth of our relationship since the pandemic started.

The image itself doesn’t have anything about it that is significant to what made our relationship change. I could have chosen a photograph of my parents from maybe four months ago, but it wouldn’t have felt the same.

It’s only when this picture was taken that this time in our relationship was captured. I’d like to say my relationship with my parents has evolved positively.

Before quarantine, they weren’t really a part of my life. I was busy with school, and they were just the people I’d see when I got home.

Yet, around last March, when things were at their worst Covid-wise, I’d say my parents and I started doing lots of things together. We became a part of each other’s day-to-day lives.

It was a new dynamic and it was very unnatural, so it took a lot to get adjusted. Nowadays, Covid restrictions are lifted much more, so my parents and I aren’t a part of each other’s day-to-day lives again.

But that gap of quarantine in between changed the way I think about my parents. During that gap, having to be physically present with my parents, I became more aware of what our relationship has been.

I noticed that I had actually been ignoring my dad and getting mad at my mom a lot. I never even knew because when I get angry I don’t express it I just keep it quiet.

So I noticed just how often I would get quiet around them. I noticed a lot of the responses I’d give to them in conversation, and how they would be very sarcastic.

They started to occupy my mind a lot more as my problematic relationship with them came to light, which was a little painful, but I had nothing else to worry about really from quarantine.

Little by little, my anger towards them went away. I would journal about them because realistically I realized I had nothing to be angry at them about.