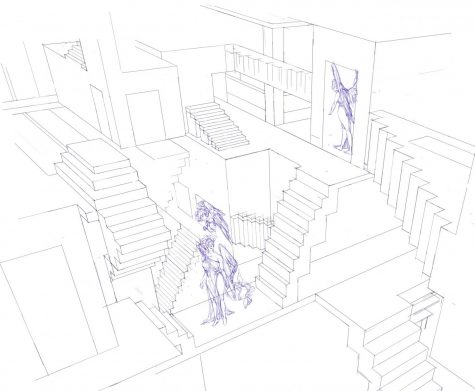 This bare-boned digital sketch (created in Autodesk Sketchbook), while unfinished and still currently a large work in progress, is a visualization of the feeling of aimlessness, restlessness, and limbo I’ve had during the pandemic.

A commonly reported feeling during the pandemic is of the days, weeks, and even months bleeding together. But I’ve also felt like the same thing happening with my schoolwork. My motivation to do what I previously would have felt sure of doing was gone. Then eventually, my direction of where I wanted to go and what I wanted to do disappeared.

As a fully remote student, I was not only distanced from the companionship of friends and peers but also from an environment of setting goals and having the drive to reach them.

The reassurance that my ideas of what I wanted to do with my future could be easily seen in others around me. Even just overhearing something in a conversation while walking down the hall is something I never noticed as important in my daily life until now.

Spending almost all of my daylight hours on the computer doing almost everything, from schoolwork and college applications, to socialization and watching or playing entertainment, even outside breaks, made the boundaries between one thing and another start to fray.

It’s become increasingly easier to start any activity in front of me while not fully registering what I’m doing, or why, or when I’m supposed to be doing it. Simply signing on to my computer and doing the first things to come up on a list or school page is now a practiced habit.

In the time that I’m not on the computer, I feel like I’m constantly disassociating, not having purpose linked to much else outside of my desk.

If I were to put all these feelings into a (somewhat) habitat, it would look like an Escher-esque* space of infinite stairways, dissimilarly-styled doorways, and unhelpful neon signs that point in ambiguous directions, which is what this piece will incorporate into its final product.

I also plan to put a classical-style statue of a single angel wandering the space, looking a bit worse for wear at certain points around the page to tie into the historical meaning of the word “limbo,” which in Roman Catholicism refers to a place for souls that couldn’t get to heaven due to not having received baptism in life.

In this context, it’s a soul that can’t really find a way out of the house, due to not having received a Covid vaccine nor the benefits of herd immunity.