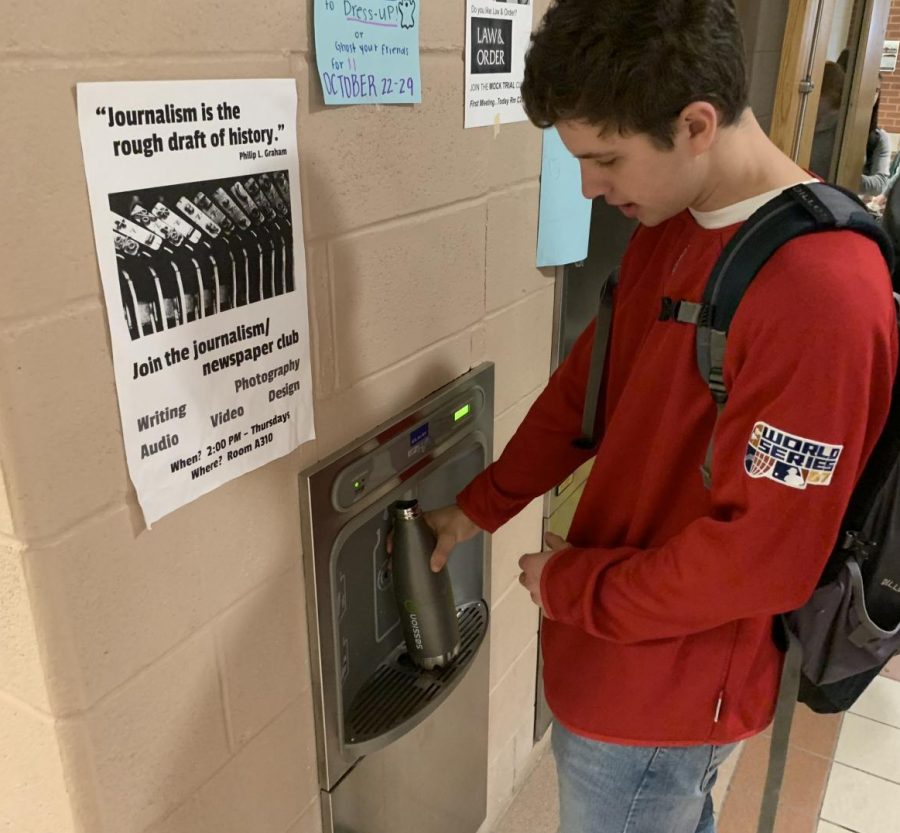 Brett Crochiere taking advantage of the new, clean water from the fountain outside the cafe

The class of 2018 installed a new water fountain outside the cafeteria as a gift to the school over the summer. The new water fountain has an improved filtering system, saving thousands of gallons of water and supports the use of reusable water containers. Prior to the new fountain, the older version was out of order and contained minerals unsanitary for public consumption.

“We wanted to purchase a new environmentally-friendly water fountain to replace the dysfunctional one. We hope our gift encourages students to use more reusable containers, rather than plastic ones, making HHS a more sustainable place,” Nate Pucci said.

Pucci was the class of 2018 president and led the petition for a new fountain for students as their gift to the school as a whole class. He and the other class officials raised $5,000 to replace the previous fountain along with their class advisor Mrs. Elder.

Mrs. Elder said that the seniors wanted “a new bubbler that had a better filtration and saved water.” Mrs. Elder was the class advisor for Class of 2018 and a very critical part of the project.

The new fountain is a great success according to current senior, Brett Crochiere, who uses it daily.

“I drink a lot of water throughout the school day, requiring me to fill up at school. The water from the new fountain is a huge step in the right direction because it tastes much better and is easier to use for larger bottles”, Crochiere said.

The fountain was built over the summer by a local company. The project required taking down most of the wall the fountain is built on, in order to put in all the new pipes. It took almost the whole summer for all the planning and materials to arrive at the school. The graduating class reached their goal of having the new fountain ready for the upcoming school year.