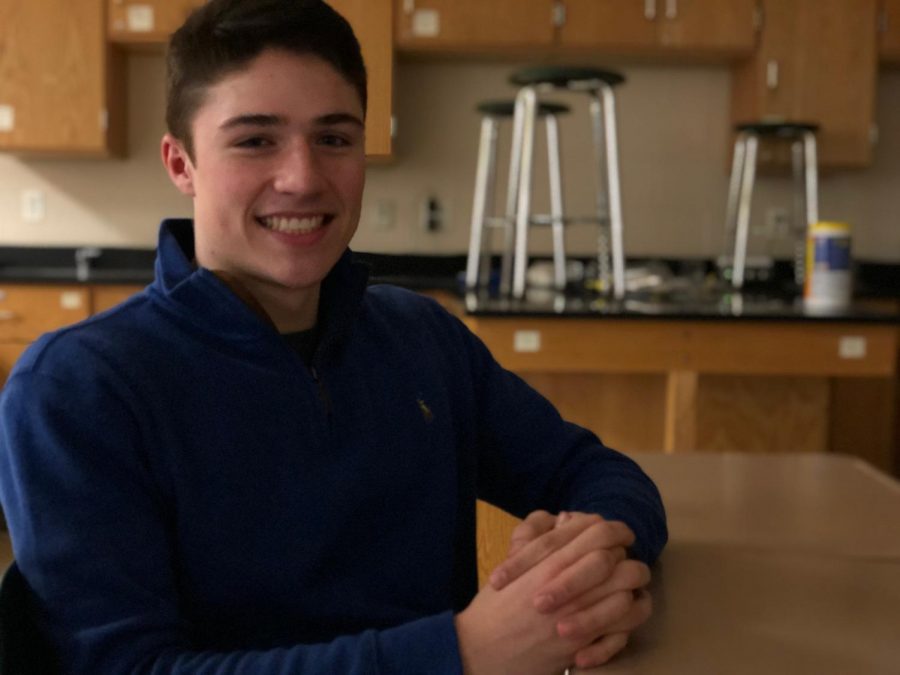 This warm smile is something Pucci shares with all of his classmates on a daily basis. Photo by: Connor Delaney

In the Spring of 2014, the Class of 2018 sat patiently on the grass outside of Hopkinton Middle School awaiting the results of the first class election. As the name “Nate Pucci” was announced as their class president, a palpable feeling of hope and triumph reigned over everyone. The future was surely bright for a class with an exceptional leader.

Pucci, now a senior, has been elected as class president of Hopkinton High School’s Class of 2018 all four years. During these four years, he has been the spokesperson for the Class of 2018 to the administration, he has planned class events, he has raised and allocated class funds, and much more. While Pucci has been very successful in these duties over the past four years, he admits that there were some hardships, especially when it came to the topic of school dances.

“After the first school dance freshman year, the administration decided to take the dances away which was very unfortunate for our class. Our classmates were upset with us officers because we tried to talk with the administration to get the dances back but it was ultimately unsuccessful. After that, we tried whenever we could to get the class together outside of school for fun events other than school dances,” Pucci said.

The loss of school dances has always been something that upset the Class of 2018, so Pucci, being the spokesperson for the class, spent many years trying to work with the administration to get them back. When his attempt to get the dances back was met by a stubborn administration, he knew he had to give the Class of 2018 a dance they deserved. He had this opportunity with prom.

“Prom was a highlight. We were able to run a very successful event, but it could not have been done without the help from Zoe Komodromos who lead the prom committee, our other classmates, the other class officers, and our class advisors,” Pucci said.

While on the topic of Pucci’s successes as president, he humbly emphasized that it is not only him that can take credit for the Class of 2018’s successes, but his fellow classmates too.

“We have a really awesome class. I think that everyone has shown a lot of respect to us officers, to the teachers and administration, and to their other classmates, which has made the past four years very successful, and has made my job a lot easier,” Pucci said.

Zoe Komodromos, a fellow classmate of Pucci, helped organize the prom while also spending two years working alongside Pucci as a class officer. Komodromos was eager to speak on behalf of her experience working with Pucci.

“Nate is so hardworking and dedicated to his position as president, and especially during my time in office and as prom chair I really was able to see how that positively influences the people around him as well. He is great at listening to others and taking all ideas into consideration,” Komodromos said.

Komodromos was not the only one who was eager to speak on Pucci’s positive influence on his classmates as class president. Pucci’s long-time friend and fellow class leader, Zack Sisitsky, spoke about Pucci’s time as president.

“He is articulate, bright, curious and inclusive, and somehow finds a way to lead the group while intently listening, connecting and validating what every group member has to contribute…he has achieved his goal to make meaningful connections with a wide array of students he never knew before, a feat that summarizes the personable, thoughtful, and vibrant nature of Nate that makes him such an admirable leader and role model,” Sisitsky said.

Through talking to his classmates and fellow student council members, it is clear that Pucci has already established himself as a personable, dedicated, and successful class president who has represented his class well. However, Pucci was quick to point out that his job as class president is far from over, even though he is in his last semester of high school. He is still working hard to make sure that all of the final events for the seniors, such as “The 50 Days Dinner,” the Boat Cruise, and Graduation, are all memorable events for his class.

The Class of 2018’s time at Hopkinton High School may be coming to a close, but they have been able to have four memorable years with the leadership and guidance of Pucci. Pucci is still not sure what school he will be attending next year, but he hopes to continue to lead and positively influence others around him.