An Inside Look at the 2016-17 Hiller Hockey Season

The hockey team exceeded expectations by recording the best record in school history and in the playoffs played in what Athletic Director Dee King described as “the most exciting high school hockey game I have ever seen.”

The Hillers finished their season 17-2-1 and entered the playoffs as the fourth in the state. After starting the season 14-0-1, the team suffered two straight losses to TVL rivals Medway and Westwood, costing them the Tri-Valley League title. 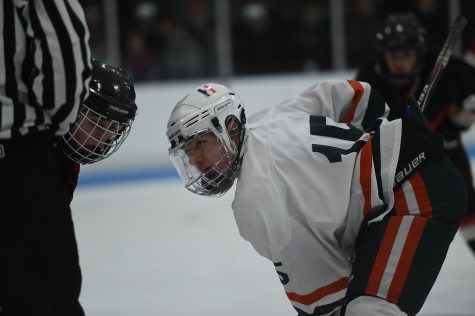 “That was definitely the turning point in the season,” sophomore Stephen Simoes said. “We had a really effective team meeting that turned us around.”

The Hillers rebounded and won their next three games, solidifying themselves being a top seed in the state tournament.

After cruising to a 9-1 victory over Silver Lake in the first round of the playoffs, the Hillers faced another powerhouse, Old Rochester. In a thrilling game that went into double overtime, the Hillers lost 4-3.

Old Rochester had the leading scorer in the state, with 85 points, but he was shut down the entire game by the Hiller defenders and by wing Stephen Simoes, until scoring the gamewinner 20 seconds into double overtime, putting the dagger in the Hillers’ season.

While Simoes had multiple blocked shots and hits in this playoff game and throughout the regular season, he was one of the Hillers’ top offensive players as well, leading the team with 15 goals.

“It was a heartbreaking loss,” King said, “But those are the moments that the players will remember. The fans were covered in patriotic gear and cheering for their team the whole game. You could tell it impacted the players on the ice. They got pumped when the fans got pumped.” 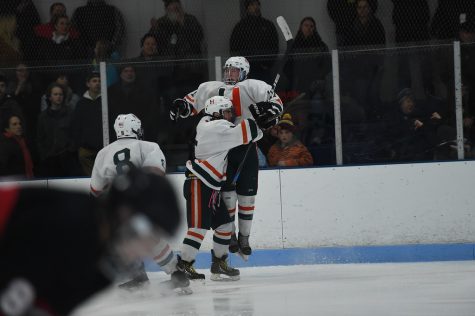 The Hillers faced hurdles during the season, just like any other team, but what made them a successful team was their ability to maintain team chemistry.

“The team chemistry was very good. There were only a few problems throughout the year. And when those problems arose they were immediately taken care of,” senior captain Timothy McGrath said.

“The captains did a pretty good job of keeping us a close-knit unit most of the time,” junior Dylan O’Leary said. “We got over the bumps in the road and were able to stay together.”

While the Hillers were known as a tough and gritty team, they were also known as having great sportsmanship and character.

“Sometimes there’s an unfair stereotype that a tough athlete may not be a great person,” King said, “So I think to be able to see that some of the toughest, hardest working kids on the hockey team are probably some of our quietest kids in the hallway. They are able to be tough, play tough, and carry good character.” 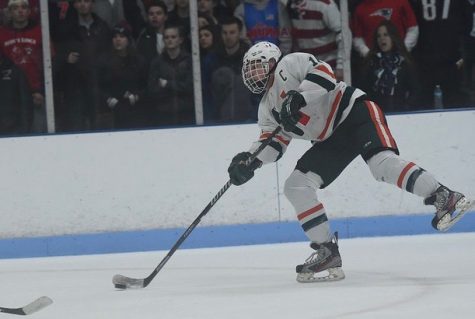 O’Leary has been selected as a captain next season. He attributed the team’s high character this year to captains Will Pickens and Tim McGrath.

“I have an extreme amount of respect for our captains and how they conducted themselves. Next year I hope I live up to the mark set by them this year,” O’Leary said.

The Hillers had a unique situation this season, as they had three goalies who were established and successful high school goaltenders. While O’Leary was given the two playoff starts, they all received playing time during the regular season. 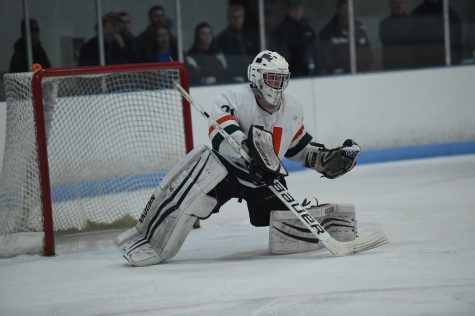 “I think having three goalies was good for us,” senior defensemen Everett Rolph said. “It pushed everyone to play their best each game and forced the goalies to be competitive and have a little friendly competition.”

While this may cause drama on most teams, the Hillers played well with each goaltender in net.

Senior netminder McGrath said, “I do not think it really affected the team. Everyone had confidence in all three goalies and played well behind all of them.”

Also, each goalie felt like he could play at his best when having about a week of rest between starts. They never felt the fatigue that they would have if they had to start every game.

“I think all in all, having multiple starting goalies helped us. Without having to play every game, I stayed fresh the whole season,” O’Leary said.

While the Hillers certainly had a successful season, they are not content. This season has set high expectations for next year. 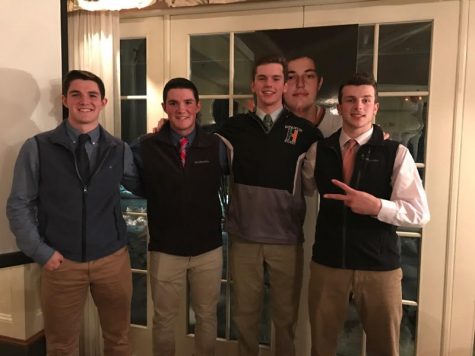 his year we missed the TVL championship by one goal and got knocked out of the playoffs by a state finalist team in double overtime. I hope we can make a run next year like I know we can,” O’Leary said.

“I want to try to win the second game of the tournament at least,” Simoes said. “We want to go to the (TD) Garden and compete for a state title.”

Graduating captain McGrath said that he believes that the team is in good hands next year. “The new captains are battle tested and will do a great job leading the boys,” he said.