Donald Trump, the 2016 Republican presidential candidate, is a man who has been met with a lot of controversy during his campaign. His comments about muslims, Mexicans, and women have seen a lot of criticism from many American news anchors and political pundits, yet he still carries millions of supporters and has a strong chance at the Oval come November. What is it about this man that people love? What is it about him that people hate?

His largest and most recent controversy involved his comments about women before an Access Hollywood interview, in which he discussed groping women, comments that some consider bragging about sexual assault. Trump has dismissed these comments as “locker room talk” and reassured voters that he has a lot of respect for women.

How is Trump doing in the election right now? Even after these comments, according to RealClearPolitics, a website that averages the top polls in the country, Clinton is about 5 percentage points ahead of Trump. While this is a decent lead, the numbers constantly fluctuate and it is certainly not indicative of a Clinton victory in November.

At HHS, only about 23.3 percent of students support Trump, with 57.2 percent supporting Clinton. Of the students that took the survey, a majority indicated their political views were liberal or moderate, while about 30 percent leaned conservative. This means that at HHS, not every conservative student was in favor of Trump, the nominee for the conservative party. This reflects a trend in American politics, with many prominent Republicans such as Speaker of the House Paul Ryan refusing to defend Trump.

Even with his critics, Trump still has millions of supporters eager to vote in November. 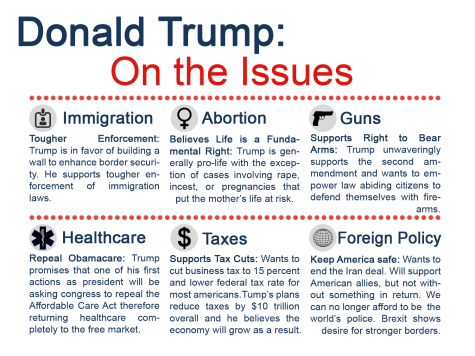