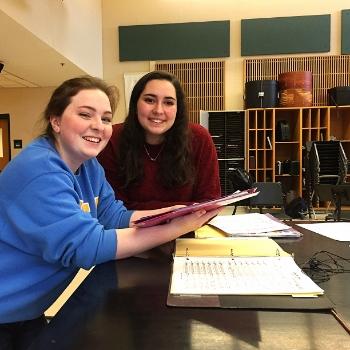 Each Wednesday the HHS music room is monopolized by 20 young women and their conductor who are purposefully discussing and rehearsing music for their upcoming performances.

This auditioned after school vocal group,more formally called Noteworthy, was established under the direction of Mr. Brody in 2011 for members of chorus who want an opportunity to challenge themselves and delve into more complex music. They meet once every week for 90 minutes and sing pieces that range from melodic lullabies to upbeat pop songs.

Emma Nigrosh, a senior who has been in the group for three years, said, â€œNoteworthy is a group of very dedicated girls who want to take their chorus experience to the next level… We have to come to rehearsal with the music learned, and polish up little nuances like dynamics and phrasing.â€

Reilly Kopp, a senior who has been in Noteworthy for the entirety of her high school career, spoke to Noteworthyâ€™s repertoire, â€œWe typically sing classical music…but in the spring we do pop, jazz, and more contemporary styles of music.

â€œNoteworthy performs at school concerts that happen three times a year–theyâ€™re usually on a Monday or Tuesday night in the auditorium–and we also have a competition once a year in March where we… are judged by outside judges,â€ she said.

Because Noteworthy relies so heavily on individual skill to achieve its intense musical goals, it can be a challenge to be a part of the group. Cassandra Clark, another senior who joined the group as a freshman, shared her perspective: â€œAt times it gets really stressful when we have deadlines–like we have to have everything memorized by this time–but in general we all work together really well.â€

Kopp adds, â€œItâ€™s been more strenuous in past years because weâ€™ve upped the level of difficulty on our songs. It requires more outside of rehearsal time, but I think that the challenges of it are also rewarding.â€

Not surprisingly, Noteworthy has been a learning experience for these young performers, giving them insight not only into music and performance, but also into teamwork and social skills. Nigrosh commented, â€œItâ€™s taught me to really respect others and reach out to others that I wouldnâ€™t normally talk to, especially people in younger grades that I wouldnâ€™t normally see. And itâ€™s really just helped me get close to a new group of people that I never would have been close with if it wasnâ€™t for Noteworthy.â€

The group has already been making improvements over the four years it has been present at HHS. Kopp said, â€œIt has become larger–freshman year there were only 11 of us, and sophomore year it jumped up to 20 which is where it is now–itâ€™s also become more challenging and slightly more difficult to get in. I think [Mr. Brody] has higher expectations of musical ability, not just vocal talent.â€

Nigrosh summed up her Noteworthy experience quite elegantly: â€œSeeing how much we can grow from all the practice we do and seeing our hard work pay off has really been a great experience. The late nights of doing Noteworthy music after studying…it just makes everything so worth it.â€