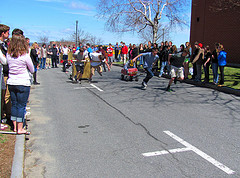 HHS Chariot on left was pulled by Tyler Mikulis, while Jack Walters and Cory Branch were riding. Photo by Grace Centola

By Grace Centola
On Thursday, April 14th, HHS Latin and Greek classes and their teacher, Mr. Mitchell, traveled to Holy Cross College in Worcester, MA to participate in the annual Classics Day.Â  During Classics Day, students from many different high schools that also study the languages of Latin and Greek come together to participate against one another in a choice of three different contests.

The first is the Certamen, a contest that tests students on their knowledge of Latin grammar, Roman and Greek Mythology, Roman history, and Roman life.Â  During the Certamen, each team is made up of four students, and there are twenty five toss-up questions and two bonus questions for them to answer.Â  The three teams with the highest scores then continue on to the final round.Â  Hopkintonâ€™s lower level team, which consisted of Nick Giordano, Cory Branch, Jack Walters, and Brian Leonard, beat the team they were going against in the first Cretamen, but did not have enough points to go onto the final round.

Next, there was a costume contest.Â  Students could dress as any person, god, goddess, or thing from Ancient Roman or Greek society.Â  The students then had to be able to tell the judges about their character.Â  Mr. Mitchell said, â€œEveryone from Hopkinton did very well, and the costumes were fun!Â  Travis Murdockâ€™s Hydra outfit in particular was a hit, and he had many people asking him to take pictures with it.â€

The final contest that took place was the chariot race.Â  Students had to follow specific guidelines to build chariots, and then raced on a road at the Hart Center at Holy Cross.Â  The winner of each round moved on and had a chance to be part of the final round.Â  Hopkinton’s chariot did not win the race; however, they won the creativity award for the second year in a row.Â  HHS student Tyler Mikulis said, â€œMy favorite part was the Chariot Race and watching the Hopkinton chariot race by as the unfortunate group’s chariot toppled over onto its side, sending the rider flying.â€

Classics Day was a success among HHS students, and Mr. Mitchell stated, â€œ Yes, we are definitely going back next year, everyone enjoyed Classics Day and learned a lot.â€