“Limitless” Will Keep You Glued to Your Seat 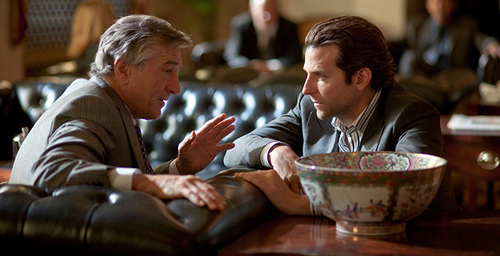 By Catherine Leonard
On Friday, March 18th, the movie “Limitless” premiered in theaters and grossed over 12 million dollars during its opening weekend.

Eddie Morra (Bradley Cooper), a dead beat â€œwriterâ€ who has yet to even begin the first sentence of his novel, is already feeling hopeless when his accomplished girlfriend Lindy (Abbie Cornish) dumps him for being a loser. Â Right after this setback, he bumps into his ex-brother-in-law Vernon (Johnny Whitworth), a slick character who offers him a new drug called NZT.Â  The drug supposedly allows a person to unlock the 80% of their brain that is rumored to be unused, thereby making the person limitless (this is not true, 100% of the brain is used at different times). Â Eddie is instantly hooked, and although his brother-in-law is no longer in a position to tell him anything else about the drug, Eddie is able to secure an infinite supply.but his brother-in-law is no longer in the position to tell Eddie any more about the drug. Â At this point the film splits into a myriad of subplots, a lot of which end up unresolved (including a number of unsolved murders). However, the main plot of the story follows Eddie through the highs and lows that can be associated with any drug use, and his journey to make it big and reach his full potential.Â  During all of this action, Eddie is battling against an assortment of villains as well.

Other than his charm and good looks, Bradley Cooper did not offer anything exceptional to the role of Eddie. Â His acting performance was average, but it got the job done. Â He proved to be very good at transforming from a disheveled and burnt out writer in the slums of New York, to an accomplished novelist, winning poker player, ladies man, Wall Street guru, and all around millionaire playboy. Â If not for his acting abilities, Cooper was a good choice for the lead role because his male fans are still laughing over his role in “The Hangover”. Â Plus, ladies love him.

Director Neil Burger, best known for his 2008 flick “The Illusionist”, was creative when it came to the movie’s cinematography. Â At the point in the movie where Eddieâ€™s mind shifts to full capacity, the colors become more intense and the images are flooded with clarity.Â  These effects accompany the â€œI was blind and now I seeâ€ line that Eddie utters after he takes his first hit of NZT, and make the scene more intense and dramatic. Â Burger also used tricks like bending the images, and provided a telescopic view of New York with a rushed shot of the city streets.Â  However, he also used some original techniques, such as showing a flashback compilation of old KungÂ Fu movies during Eddieâ€™s sudden and unexplained run in with a bunch of thugs on the subway.Â  Overall, the effects were interesting, and did a fine job in conveying the transformations that were taking place.

Limitless is an exciting film with a creative plot that captivates and entertains the audience.Â  The movie is worth the price of admission for people looking for a good, popcorn-munchinâ€™ flick, but not an Oscar worthy film.Â  The final fifteen minutes of the film deliver a shot of adrenaline to movie-goers, followed by an open-ended finale that will leave you wondering what you would do if you were truly “limitless”.