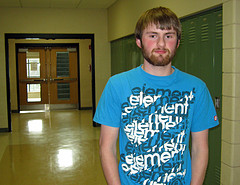 Dan Quigley, one of the Ultimate Frisbee Team captains, talks about team goals for the upcoming season. Photo by Sean Pettepit

By Sean Pettepit
Spring is just around the corner, and Hopkinton High Schoolâ€™s Ultimate Frisbee Team is anticipating a successful season.Â  The captains of this rapidly growing club, seniors Dan Quigley, Matt Mangano, and junior Max Vumbaca, are excited to improve this year’s team. Â They started reaching out to other towns last season, giving them a strong foundation to build off of this year. Â As an up-and-coming sports club in the school, the frisbee team’s members hope to expand the club even further this season.

The Frisbee Club experienced unprecedented growth this year, mainly due to the heavy promotion by club members. Â Many of the senior club members are pushing for more freshmen and sophomore involvement. Â â€œI have personally tried to emphasize the freshmen on the team because there are a lot of them and they will be the future [of the club]. We’re putting a lot into making the team better this year, and a lot of that is for the sake of the programâ€™s longevity,â€ said Quigley.

The club requires funding for transportation, as well as fields for home games. Â Due to varsity sports, securing locations for home games is a struggle. Â Quigley stated, “Ultimate [frisbee] is a ground-up program that is fast growing across the country, but it still lags behind many established sports that fight for the funds and attention of the school population”. Â  In comparison to varsity athletics, team advisor Diane Welch said, â€œThe club gives the students more freedom and ownership of their team. Â There is a huge difference from the club that was started 5 years ago. Â Not only have they reached outside to other towns, but have become far more competitive and successful against other schools.â€

Aside from HHS, the team is now looking to neighboring towns for support. Â â€œ I’d like to form a good relationship with clubs around our town, Holliston and Ashland in particular, and use our success and popularity to move the program forward,â€ said Quigley.

Club member Dan Dubinsky stated, â€œI have a really good feeling about this coming season. Thereâ€™s a lot of good incoming talent.â€ Â Practices will start at the end of March, and the club’s first game will be in the beginning of April.