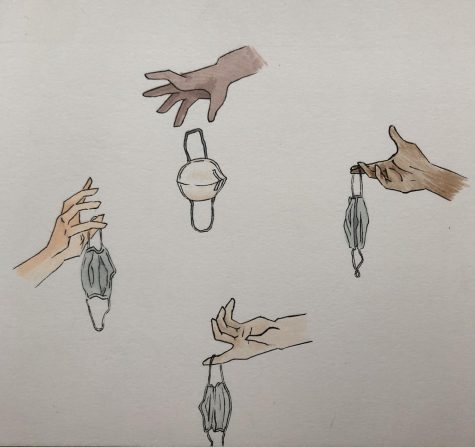 A little over a week ago, I was walking home from the downtown tennis courts. I tend to notice things on foot that wouldn’t normally catch my eye from a car window. So along the route, I counted approximately 20 discarded single-use masks laying on the ground, flattened, and dirty as I had passed by.

I’ve always spotted trash like crushed cans and empty cigarette packs on my walks home, but then it occurred to me that I had never walked on the roadside since the pandemic began. I had never noticed how big of a problem improperly disposed of masks could be until I saw them in large numbers strewn along the street.

Soon after, I grabbed a blanket, sat at my desk, and created this piece to represent the issue of face masks that have been not properly disposed of.

I drew the hands in positions that would convey the carelessness and clumsiness of people who partake in such harmful actions with the masks dangling from their fingertips.

To make this piece, I used a pencil to sketch the rough idea, a pen to create the outlines, and acetone markers to add color and shading. I wanted to add more diversity in both the mask types and skin tones, but I was restricted by the available shades of markers. It took me approximately two hours because I hadn’t worked in this medium in a while.

While making the drawing, I pondered the possibility of biodegradable masks that could be created in a way that makes them cheap and readily available for a larger portion of the population.

An interesting alternative would be the creation of masks that could be recycled by traditional methods, where they could be thoroughly sanitized and broken down to be used for other products.

I hope that by creating this, people will consider investing in reusable and washable masks that have been approved by scientists as safe, so they aren’t tempted to litter when presented with the issue of disposal.

Hopefully, this image will keep the well-being of the environment in the back of people’s minds throughout their day, imposing self-discipline when approached with the opportunity to take the easy way out and drop their trash on the ground or throw it out the window of a car.