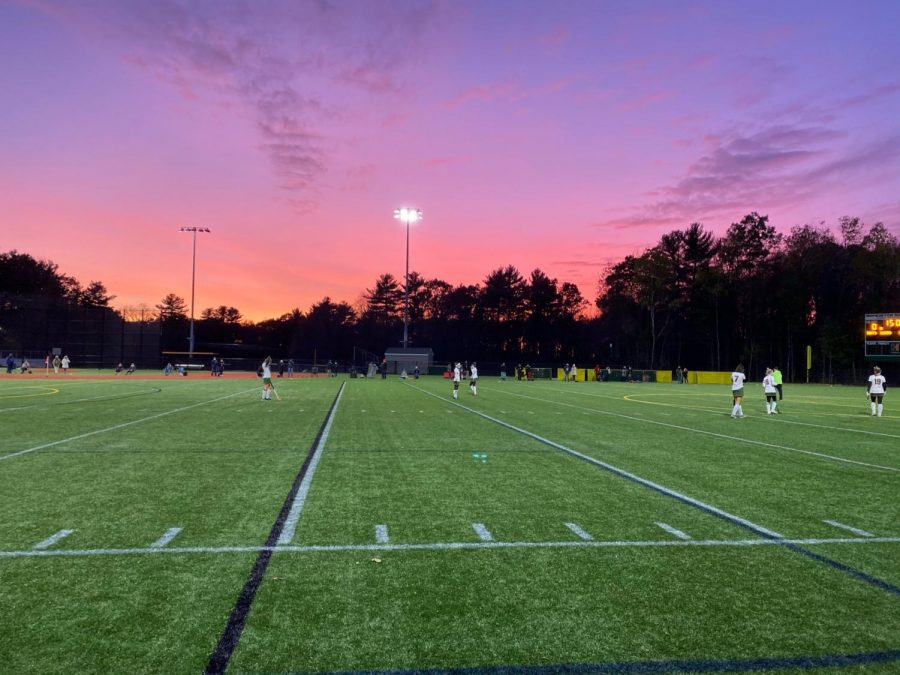 Hopkinton gets in formation at the game's 4:45 start. Hopkinton's offensive pressure at the beginning of the game allowed them to take control of the field. After the original game was postponed due to snow, the team was excited to play under the lights.

The Hopkinton field hockey team defeated Ashland 3-1 this Tuesday at home for their senior night game with goals from Alyssa Souza, Avery Hutchinson, and Elizabeth Kane.

After a 0-1 loss to Ashland the day before, Hopkinton was eager for a win against the town’s rival. With energy levels high after senior night ceremonies and traditions, Hopkinton scored within the first two minutes of the game.

“I saw the perfect opportunity to score, and I took the shot. Our intensity was really high,” said senior forward Alyssa Souza.

A goal from junior Avery Hutchinson was scored in the second quarter, assisted by freshman Camille Perlov. Elizabeth Kane scored in the third quarter, solidifying Hopkinton’s lead. Hopkinton’s offensive pressure and intensity levels caused them to dominate the majority of the game.

Hopkinton came into the last quarter up 3-0, with a goal from Ashland in the final quarter of the game.

Standout freshman goalkeeper Caroline Kane made 6 saves, holding Ashland to only one goal.

“We’ve had a hard time scoring this season, so I just really wanted today to be a success,” said coach Rebecca Abate.

Among COVID restrictions and a late start to the season, field hockey looks very different this year. The teams are limited to seven people on each side, normally each team has eleven. The players are also required to wear masks and social distance on the sidelines.

Despite the circumstances, Hopkinton field hockey is excited to still have a season, and for many players, it will be their last season at HHS.

Senior night is an exciting event for the team, with decorations and a small ceremony to shoutout the senior players. Normally the last home game, senior night for fall sports has been moved up, in case the season is cut short due to COVID.

“We really wanted to make it fun for the seniors. Even though this year has been so weird, we really wanted to keep up all of the traditions as best as we could,” said junior Emma Torgerson, who had a major role in organizing the event.

The team is looking forward to finishing off the season strong, with only four games to go against Medway and Bellingham. Their next game is Saturday, November 7th versus Bellingham at 6:45 PM at the Hopkinton High School turf.