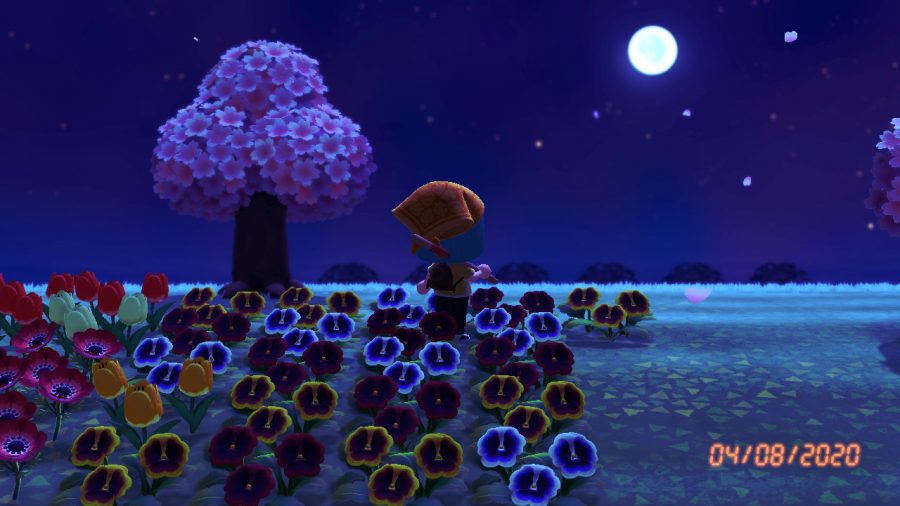 Since the pandemic, social isolation has led to many difficulties in people’s social lives. However, there is a new way to connect with others: Animal Crossing: New Horizons. For players new to the Animal Crossing series, the game is a wonderful introduction to the previous games.

Animal Crossing: New Horizons was released on March 20, 2020, as a continuation of the Nintendo game series; Ana Kyogoku is the main director and Hasashi Nogami the producer. With its relaxed aesthetic and carefree atmosphere, more people have delved into the game as a virtual escape from the global pandemic.

In Animal Crossing: New Horizons, the player arrives onto a deserted island after taking part in Tom Nook’s “Deserted Island Getaway Package”. With guidance from Timmy and Tommy Nook, the player begins their journey to the deserted island along with two other starter villagers. Upon arrival, the player is introduced to Tom Nook himself; after going through a small tutorial, the player’s true adventure begins.

While the main story of the game is short and simple, what makes the game so appealing is its nostalgic atmosphere, fun customization, online interaction, and the numerous collections within the game.

While the graphics and design are a small part of Animal Crossing, it’s what makes the game nostalgic. The aesthetic chosen by the designers complements the relaxed and easygoing atmosphere of the game. Under the circumstances of quarantine, frolicking among flowers or strolling across the beach provides a sense of comfort and escape from the pandemic.

Minute details such as shadows, lighting, and natural movements (such as water ripples, swaying grass, etc.) make the gameplay run smoother. There are even certain soundtracks for different times of day, each matching the mood. In addition, the realistic sky colors create a sense of being that creates reminiscence within players of the previous games.

I definitely feel that the creators and producers of the game put great thought into the atmosphere, as each moment captures its own emotion, whether looking at the sunrise, doing chores in the afternoon, or even going on bug hunts at midnight.

Another aspect of the game to look forward to is the unique customization. Initially, the player will only have access to a set number of hairstyles, eye shapes/colors, and clothing options. As time progresses players will gain more customization options attainable items such as mirrors and clothes closets.

The design app is also another way to customize the player; players commonly use this to create certain makeup looks, however, it can also be used to add custom designs onto furniture and floors.

While the game presents numerous customization options, players don’t really begin customizing until they gain access to the Able Sisters’ Tailor shop. After building the museum and Nook’s Cranny, Mabel the blue hedgehog will appear on the player’s island. After a certain amount of visits, Mabel will speak about setting up shop, prompting the player to choose a plot for it.

While the shop itself gives access to new and interesting clothes, which really makes it important is the ability to share custom designs. Any player who has their own shop can create their own outfits, however, they won’t be able to share or access other designs without a subscription to Nintendo Switch Online.

While the game has great design aspects and interaction abilities with other players, what makes the Animal Crossing series so fun is the collection completion that is invoked within players. We see this in many aspects of the game. In the museum, the player looks to fill up the art wing, fossil wing, and aquarium wing.

The different types of fish, fossils, and insects that are collected give a sense of purpose to the player. We also see this in the plants and flowers, as players attempt to collect all 6 fruit trees along with the various types of flowers in the game. Players eventually learn and utilize the numerous in-game systems that help aid in completing certain collections and give them a sense of satisfaction.

Ultimately, I find the game very enjoyable and give the game 4 out of 5 bells. With its detailed environment design, collection satisfaction, and online interaction capabilities, it’s hard not to enjoy playing this wholesome game. My only true criticism of this game would be in the minor bugs that players experience and the “hacks” that players exploit in order to quickly complete the game.