Caroline Estella: Heading Off to Nationals 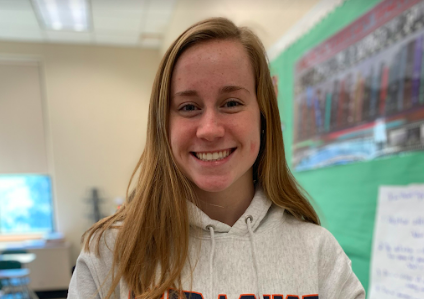 Caroline Estella mentally preparing for a tough track practice later in the day to get ready for her big race in March.

In the spring of her seventh-grade year, senior Caroline Estella decided to quit gymnastics, a sport that she had played since she was three, to be able to play sports for the school. She never imagined the future high school success that would come when she signed up for track in eighth grade.

“I just did it at first for something to stay in shape and keep me busy. I didn’t really think I would be any good at it,” Estella said. “In fact, I was actually pretty bad at track when I first started in eighth grade.”

Since that eighth grade spring season, Estella hasn’t taken a season off from school sports. She has played on the field hockey team and ran for the winter and spring track teams all four years of high school.

“When I was a freshman, I was planning on taking the winter off after the field hockey season. It was my friend Caitlyn Halloran, a junior at the time, who convinced me to sign up for track,” Estella said.

It was Halloran who mentored Estella throughout the four seasons that they were teammates.

“She pushed me at practices, encouraged me to try new events, and drove me home from every practice,” Estella said.

Through this encouragement, Estella qualified to run the 100 meter leg of a sprint relay at New Balance Nationals in the spring of her sophomore year.

“It was great to be able to run in the same relay as Caroline at nationals,” teammate Delaney Mick said. “She worked so hard for it, and it was clear that she was super determined to make it there.”

From there, her success continued. Estella competed in the 400 meter leg of the distance medley relay and the 1-1-2-4 relay at nationals in the spring of 2019.

She also qualified to run the 400 meter in the sprint medley relay this March at nationals in New York City.

Along with track and field hockey, Estella stays busy by working at the Parks and Recreation summer camp. She is also an active member on the Youth in Philanthropy Junior Board.

“I like to stay busy,” she said. “It helps me stay scheduled and focused on my school work.”